Necro-Cavaliers of the Astral Galaxy reminded me of just how much fun John Harper's Lasers and Feelings is. So I made a hack. Like so many others have. 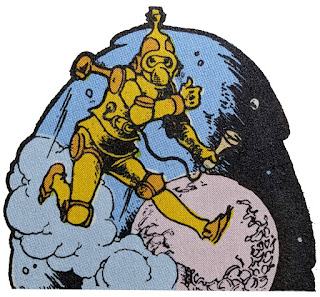 There's no new titular dichotomy for my hack, even though lasers aren't so much a part of the 30's era, Buck Rogers-style, planetary romances I wanted to emulate. Something like "Rockets & Romance" would have been entirely genre appropriate, but there's no improving on the geek poetry of declaring "I rolled LaserFeelings!"

Anyway, I hope you like it. Let me know if you play it!

Here's some of my previous noodlings along the same retro-futuristic lines:

October 23, 2018
I've prepared a new layout document of Ben Milton's Knaves . Knaves is a great, light rules set that has an extremely elegant core mechanic while retaining total compatibility with OSR material. It's pretty much the rpg of my dreams. This document contains the complete rules, plus a bunch of useful hacks from the community, plus a few of my invention, plus some useful resources from Ben Milton's previous effort, Maze Rats . EDIT: I've updated the layout to fix errata and make a few tweaks. Further, I've made 3 variations: KNAVES TABLET LAYOUT The Tablet Layout is meant for scrolling on screens, and contains hyperlinks. KNAVES SPREAD LAYOUT The Spread Layout is set up to print on Letter-sized paper. KNAVES A4 LAYOUT The A4 Layout is set up to print on A4 paper, and is probably the most elegant of the three versions. This is presented with generous permission from Ben Milton, and should in no way be an excuse for not purchasing a copy of Knav
5 comments
Read more