February 10, 2014
These satyr-variants would be at a great advantage in a dungeon, but will face a lot of bias and persecution in town. 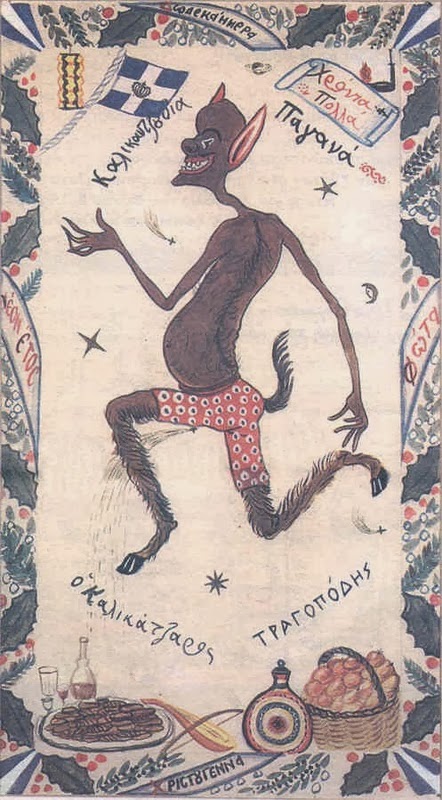 A rare, subterranean off-shot of satyrkind. Calicantsars are widely reviled as tricksters and child-stealers. This reputation may or may not be earned.

May use any weapons, and any armor except plate armor.
Hit Progression and Save as Fighter.
May not use wands or arcane/divine scrolls.
Infravision.
Stealthy: +1 to surprise.

Dazzling Music: Beginning at first level, calicantsars can cause powerful effects in others through music. They require an instrument, and prefer pipes, cymbals, castanets, bagpipes, and lyres.
Invitation to dance: One time a day per level, a satyr can perform a musical Invitation to Dance. This can be done while moving at normal speed. Instead of rolling on the normal encounter reaction table, roll 2d12 below:
2-3        Hostile, considering an attack
4-7        Uncertain, monster confused, listening to music
8-10      No attack, monster dances, conga line right out the door
11-12    Enthusiastic friendship
Panic: Once per day per level, a satyr can use music to inspire panic in others. This requires total concentration, and nothing else can be done while the satyr is performing. This triggers a morale check at -2 at any time, even if the creatures have previously rolled a 12. Undead and deaf creatures are immune.
Lullaby: A calicantsar can play soothing music to help willing creatures to sleep soundly. This can counter effects that might disturb rest needed for healing. The calicantsar must play for at least a full turn during the period of disturbance.

Horns: At Level 2, glum fauns grow rams horns that get larger and more intricately curved as they advance.

A word of warning, if you're curious about these guys: a google search for calicantsars turns nsfw quickly. Alarmingly so. I'm not talking naughty Greek pottery.