Here is an update of the rules I previously posted as the Starshut Rules. These now have the benefit of a summer's worth of playtesting, which mostly resulting in scrapping the unnecessary additions I had layered onto the base Landshut Rules. 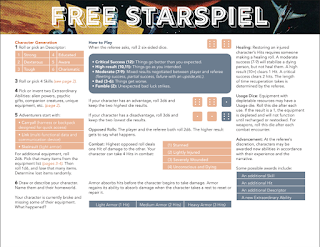 We ran the Crash of Voluturnus adventure from the Star Frontiers box set, with me converting on the fly. Well, "converting" may not be the right word, since running threats in Landshut is pretty much grasping their narrative impact and ignoring the mechanics. Instead, I could focus my efforts on making the adventure less of an iron-bound railroad. 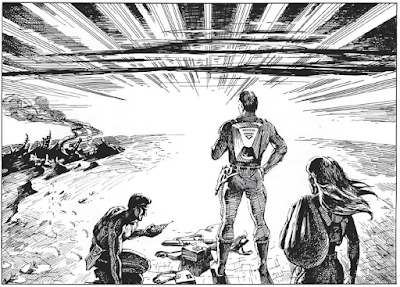 It is bizarre just how railroad-y this old adventure is. It prescribes player choice even when broader agency wouldn't have any outcome on the intended plot. I ran it without complain back in the 80's, but it sure looks awkward today.

Taking the Alexandrian maxim of "prep situations, not plots," and borrowing some of Sly Flourish's Lazy DM prep, I wrote up significant NPCs and factions and a timeline of what would happen if the PCs never showed up. Then it was a simple matter of letting the PCs loose, and see what trouble they ran into.

It was a good time. Everybody seemed to enjoy the rules-light approach, although I haven't cracked unstructured combat to my satisfaction. I had to end the game when summer wrapped up, but I'd be eager to return to it.