The Ruined Tower of Zenopus: One-Shots, Campaigns, and the Sea Caves

June 01, 2020
I've been getting a lot of good use out of The Ruined Tower of Zenopus. I've run it a half dozen times for one-shots, and have also been using it as the central dungeon in a campaign. It's worked admirably in both capacities.
One-Shot Observations
When I run this at the local library, I usually start with the hook that smugglers have kidnapped Lemunda, daughter of Portown nobility, and drop the rumor that maybe they could sneak up on the smugglers through the tunnels under the old ruins.
Interestingly enough, the one-shot parties always turn to the left at the first intersection. I recall reading that customers usually turn left as soon as they enter a store, but I had no idea this might apply to mentally entering a two-dimensional map. If this really is as consistent a behavior as it appears, that is something to take into consideration when designing dungeons.
After turning left, they usually stick to a pretty westward path, aiming in the direction of the sea caves. They miss a lot of the dungeon's offerings. But this path, ending with confronting the smugglers and saving Lemunda, takes almost three hours, every time. Perfect for a one shot.
One of the best inventions in the 5e adaptation of Zenopus is the cleaning cubes. The players always get weirded out by how clean the dungeon is. Inevitably, someone speculates that there must be gelatinous cubes around. Then the appearance of a nearly-harmless, oddly adorable little cube causes confusion, consternation, and delight. Several parties have tried to utilize the cubes to open stuck or locked doors, but none have committed to it long enough to figure out how to make that work.
Campaign
For the ongoing campaign, the scenario is different. The smugglers are a significant force who have established a blockade around Portown (or Bandar Arzoo, in the local language). Occasionally a ship gets in, but they can't get out. Little Portown is crammed to the rafters with increasingly desperate travelers and merchants. Lodging is unavailable and food is getting scarce. The town has sent ships and guards against the smugglers, but no survivors have returned. There is big reward for anyone who can provide a way of breaking the blockade, and a rumor that the haunted tunnels under the old ruins might lead to the smugglers' back door.
The party has tended to explore the dungeon for a session of two, and then spend a session in Portown, getting embroiled in local politics and having side-adventures, before returning to the dungeon. They have:
The Sea Caves
The party recently found the dungeon-entrance to sea caves, and led an expedition of 50 guards to take out the smugglers. Given that the smugglers had been able to mount such an effective blockade, their hideout needed to be pretty sizable. In the end, it nearly rivals Portown itself. 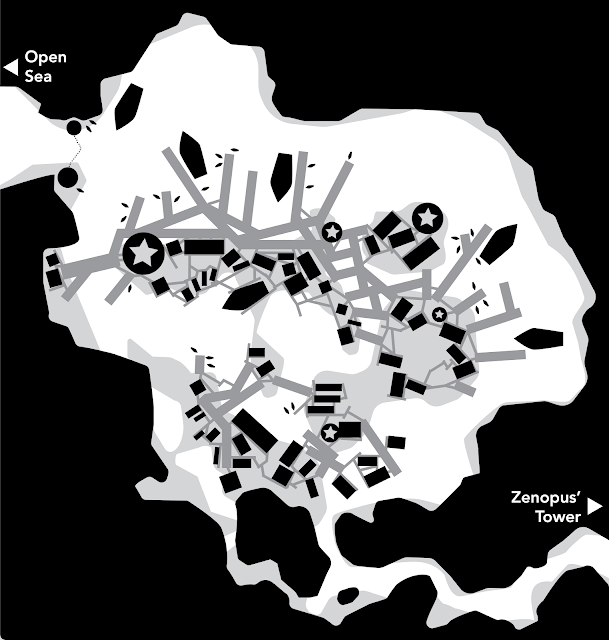 Buildings
*Goods
Ceramics, Coal, Copper, Eggs, Dried Fruit, Fresh Fruit, Furs, Glass, Grain, Honey, Instruments, Iron Ignots, Ivory, Oil, Onions, Paper, Porcelain, Potatoes, Rope, Salt, Salt Fish, Silk, Smoked Meat, Spices, Statuary, Textiles, Timber, Utensils, Wool, etc.
Ships
Each ship has a skeleton crew of 3d6 smugglers.
Population
The outpost has about 300 smugglers in total. These are Bandits, stat-wise, and for every 10 there is a Bandit Captain. The smugglers, if overpowered, would rather surrender then die, unless there is a captain present, driving them forward.
Additionally, the smugglers are in cahoots with a band of Kuo-Toa. They are more likely to come to the aid of the ships than the buildings. They are eager to fight to the death, for religious reasons.
How It Played Out
The party led the guard through the dungeon by way of the Thuamaturgist's Tower, skirting around the Brazen Head of Zenopus, which they are trying to keep secret. The guards were spooked by the appearance of a drowned fisherman's ghost, and then killed a cleaning cube, thinking it was a hostile monster.
They made it to the sea caves, where the guards assembled boats out of sheafs of reeds they had brought with them (easier than fitting long boats through dungeon corridors), and paddled into the caverns. They immediately encountered the giant octopus, by had noted the packages of meat in the smugglers' boat, and were able to get past it.
This made them very cautious proceeding forward, and I slowly revealed little bits of the passage at the bottom right of the map. When they finally reached the main cavern and started to realize the scale of it, they were gratifyingly startled.
It was decided that they should break the guard into five squads of ten, and each squad take out a ship. The thinking was that this would break the blockade, and then the Portown guards could lay siege on the rest, dealing with them in manageable numbers. This way the PCs only had to clear out one ship, and then fight off some kuo-toa.
Moving Forward
The blockade has been broken, the smuggler's outpost is burning, and Portown is free! The PCs are heroes, and will be richly rewarded. There's going to be a big shake-up, politically, and not all of it will work out in the PCs' favor. Meanwhile, the PCs have advanced to Level 3, and should be able to make pretty short work of the rest of the dungeon. I'm hoping that, once they clear it, they will take ownership of it, and use it as a base of operations for exploring to wilds outside Portown.
Meanwhile, Elsewhere...
I've loved the experience of taking one of the classic old school dungeons and running it for new audiences. Zach Howard did a great job adapting this one for 5e, and the original Holmes adventure has such solid bones—it's just plain a lot of fun.
Elsewhere on the same continent, I've been keying Quasqueton from B1 In Search of the Unknown. This one is for a dungeon-reverse-dungeon, where a group of monsters who, having abandoned their posts in the Dust Queen's army, are looking for a cozy dungeon to set up happy homemaking in. Eventually, one or the other of these two campaigns will have to deal with the local Dust Queen garrison, which just happens to have bivouacked in the Caves of Chaos.
Zach Howard's The Ruined Tower of Zenopus
My notes on running Zenopus