The Ruined Tower of Zenopus Campaign: The Portmaster's Garden Palace 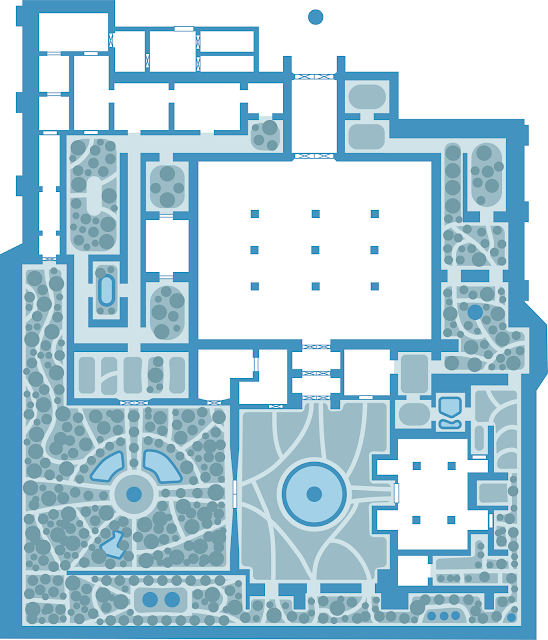 In my ongoing campaign centered on The Ruined Tower of Zenopus, Portown is called Bandar Arzoo in the local language. Ruling over the town is the Portmaster, Lord Atesh. His palace is more garden than not. The PCs have been called into Lord Atesh's office several times, but this time it occurred to me that I might need a map, in case they, oh, say, needed to fight their way out.
Most of this map is taken directly from Dyson Logos' The Palace Market, which had the open look I wanted, adjusted and edited to suit my purposes.
The white areas are typical interior spaces, and probably contain offices, kitchens, storage, and other things I feel confident I can make up on the spot. There are a few rooms at the top of the map that are the Palace Guards' station, which can be accessed directly from the street. The big room with 9 columns is the ballroom, and the smaller space invader-shaped room with 4 columns is the Portmaster's office and suite.
Everything else is perfumed botanicals and burbling water features for the Portmaster's delecation.  Most are open to the air, or artfully framed by arches and cupolas. The doors with X's on them can be barred from either side. Typically they are barred on one side to keep people out, but, occasionally barred on the other side for when the Portmaster isn't quite ready to let his guests depart.
That's weird. Why would the Portmaster want to lock guests in with him? Hmm. I'm sure it would be rude to enquire.