November 09, 2019
I trotted out my new quick character generation system, 5e One-Shot, for a game at the local library. And it was a blast!

I printed out the rules and made an accordion-fold screen out of them. 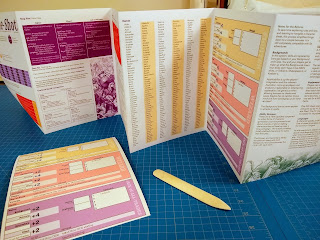 This screen didn't prove terribly useful—the arrangement of the narrow conference room and outsize table were such that no one could really crowd around a see it. But I think it lent my homebrew system an ersatz professionalism that made it easier for people to get on board.

All in all, it worked really well. Everyone ended up with a reasonably realized character with distinct strengths.

Some points of improvement:

Players made excellent creative use of their backgrounds in lieu of skills. We had two cobblers in the crowd. One used her her familiarity with shoe construction to examine footprints left at a murder scene. Another claimed a bonus climbing up a pyramid of boulders because of her well-constructed footgear (you're going to have to stretch to make cobbling relevant to adventuring).

It's hardly news that you don't need a lot of rules or complicated character builds to have a good time with an rpg, but it was gratifying to confirm that the results were still completely compatible with full-bore 5e.

We ran Treasure of the Broken Hoard, by Shawn Merwin.

I'm pretty happy with this as a module for first-timers. It's well thought out, and didn't need much prep beyond a single read-through.

It involves 5 connected mini-scenarios along a mountain range. This provides a nice variety of locations and situations, and is modular enough that there are convenient and satisfying stopping places for a one-time pickup game. It also lets the players set their pace, and provides ample opportunities to rest and heal for delicate first-level characters.

The scenarios are a little formulaic: the party arrives at a location, are ambushed by bad guy fodder, there's a puzzle to solve, but most of the treasure has already been snatched. But the elements are all solid. There are imaginative adversaries scaled to first-level play. The puzzles are varied and pitched at the right level of challenging for quick-but-not-too-quick solving. And there's some fun rewards—who doesn't want a miniature pet bear?

We made it through two scenarios in three hours. A more focused party could have made it a lot further in the same amount of time, but cares about focus if everyone is having fun?

The only conversion needed to run this adventure using 5e One-Shot was ignoring the parenthetic skill listed whenever it called for a skill check. Easy!