September 12, 2019
It may be a natural law that rule-hacks must constantly vacillate between (1) coming up with delightfully specific systems (for, say, regional haggling, or watercraft chases, or being an agnostic cleric in a world of exoteric gods), and (2) paring things down to the cleanest, simplest, write-it-on-a-single-grain-of-rice set of ultra-light rules.

The former is fun, even when you're creating things that you know will never see play (f'rinstance, Hummels as a playable race). Like every creative form I can think of at the moment, there is joy in articulating experience and imagination within the limiting strictures of the chosen medium—the meter of a poem, the panels of a comic, the mechanics of an rpg.

The latter is refreshing, because it reminds you how very little you need to invoke the magic of this hobby.

An Organic RPG
Character Generation: Each player briefly describes who their character wants to be. The referee decides how close they are to this ideal, so that they're all at about the same level of capability when starting out. Maybe the ref writes down a few keywords to reflect this.

Starting mechanic: roll a d20; higher is better; bonuses can be negotiated based on the situation at hand.

As certain situations re-occur, make a note. In the course of play, those negotiated bonuses will establish precedents, which become conventions, and then rules. How long will it take to get from this to something really specific and ornate?

You probably wouldn't get out of character generation without accruing your first couple rules. One character wants to be strong and another wants to be smart and another wants a magic wand that will let them do anything. So you invent some standing bonuses for the first two (Strong +1, Smart +1) and maybe you have to invent a magic system for the other (the wand can do anything, but it's ornery, and will only act on a roll of 16-20, and will do things its own way).

The rules would build themselves around whatever you and your players were most drawn to doing. Do you need mass combat? Social combat? Will you break turns into rounds into segments? Is crafting a big thing? Oh dang, do you have competing magic systems?

Of course, this has happened before. This must be every campaign of Sword & Backpack, right?

Tunnel Goons
I received another lovely packet from Nate Treme of Highland Paranormal Society, that included two wonderful, deeply saturated mini-setting/adventures (The Eternal Caverns of Urk and the Moldy Unicorn). As an appendix to Urk, Nate includes a ruleset fit to run his adventures with, Tunnel Goons. It's very Arnesonian, and very prime for organic development. I can't wait to play. 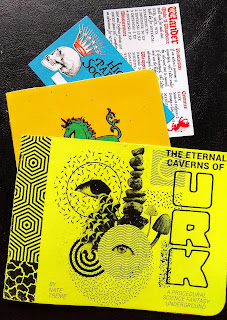 In the wake of G+, I've been pretty out of the loop, OSR and rpg-wise. But I gather everyone is talking about Arneson, at the moment. I'm sure you've seen, over on  Darkworm Colt, Norbert Matausch's posts on Arnesonian styles of play (1, 2, 3, 4, 5, 6, 7). I thought they were a lot of fun, whether they accurately reflect Arneson's style of play or not. The hobby will always be dominated by Gygaxian super-systemization, because you can market that. So it's up to us to remind ourselves of the Arnesonian impulse.

And we don't need to be partisan about it. Both are fun, and both can compliment each other. For instance, what's the first thing people did with Tunnel Goons? Spin dozens of hacks and optional systems for it. I especially enjoyed Dish Pit Witches. It's just so oddly specific to somebody's experience.