This post documents content from the G+ 1d∞ OSR Obstacles Group. It was good while it lasted. 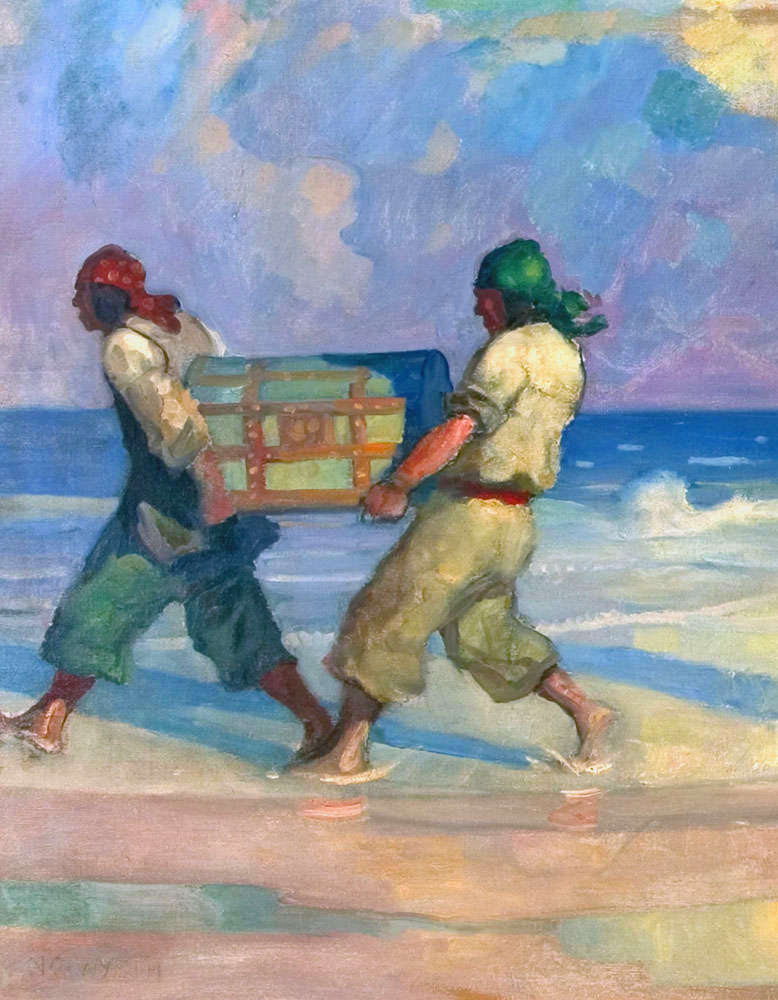 What's wrong with this treasure?
• A classic from way back: The gold coins, stamped with the face of the Dungeon Boss, are just alive enough to love the Boss and want to be with him/her/it. They will call out at the worst possible time, and can shift their weight to throw you off balance. Joel Priddy
• Another classic: The gold coins are actually chocolate coins wrapped in gold foil. Chocolate is rare, so they're still worth 1 gp, and they're much lighter than real gold. But they'll melt at anything above room temperature, and, obviously, there's a fire-breathing whatsit coming down the hall. Joel Priddy
(Chocolate coins - and everyone knows chocolate causes acne ... and berserker rages in dwarves.) John Stater
(Also outlawed as a poison in polities dominated by werewolves, wolf weres, and canid furries.) Peter Kisner
• The gold is sacred to Mammon, devil if Greed. Aside from sacrilegious imagery on both sides, it provokes greed in all who see or hold them. Dice Quixote
• The coins are actually rare metallic shelled beetles, dormant now, but awakened by movement, and looking for warm places to burrow and lay eggs. Trey Causey
• The jewels are actually all tiny magic hard with the worst prisoners of a thousand years of an ancient magical empire trapped inside and scheming to get out. Trey Causey
• More melting: Defeat the white dragon in his arctic lair. Easy kill relatively speaking. She'd gotten soft as the only inconvenience in the region are frost-gnomes.
Treasure chest glows with powerful magics. Inside +3 swords and all kinds of wonderfully enchanted trinkets . . . all made of ice.
Oh, sure, they work fine. Strong as anything. But above -5°C even the beat of an involved hand will begin melting some of the more delicate detailing. Above 0°C inventive measures must be taken to prevent melting.
Melted magic items produce minor potions related to their original use. Peter Kisner
• In a very carefully designed dungeon accessible only via narrow corridors and vertical shafts, with a seemingly endless supply of periodic hazards you find a brick of pure platinum measuring a little over 1ft on each side. It literally weighs a ton. Peter Kisner
• The treasure is a patch of rare but hardy and rapid growing herbs, easily replenished, with valuable alchemical properties which could change the national standard of living and technology level if cultivated.
Unfortunately they are obligate to the microclimate of slime filled dungeons and the detritus of an established otyugh population. Peter Kisner
• Fool's gold: can only be spent for items purchased at full retail price, will violently resist any bargaining or haggling. Many dealers know it from the look of it – the old pros just from the sound it makes jingling in your pockets/purse – and will raise their quoted prices accordingly. Sherief Gaber
• The two stupid golden idols only stop arguing between them to mock you when you are trying to do anything important. The noise will alert anyone nearby about your presence, and no one will want to buy them unless you manage to shut them up. David Lamas
• Poison: Items of the treasure themselves are poisonous or radioactive or contain poison which comes out if damage.  Or gold items are actually containment vessels for radio isotopes.
Extra-bonus:  Treasure coins found spread out in equidistant spacing across the floor.  They are actually radioactive pellets.  Placed into too big of a stack they reach critical mass and deliver a lethal dose of radiation which kills you slowly and painfully. Peter Kisner
• All treasure items have rare-earth strength magnets in them and will glom onto things dangerously suddenly and hazardously if not handled properly. Peter Kisner
• Treasure items are magic monopoles of the same type and repel each other strongly if brought within 6 feet.  But they also have properties that would make it really useful to use together. Peter Kisner
• Tainted with troglodyte stench. Must be purified in tomato juice. Anyone who touches it will stink as well. Alternative - the stink is a curse, requires magic to defeat. John Stater
• Ultra rare lotus powder, worth several thousand gp/xp Known to be hyper addictive and ultimately lethal. Nick Alexander
• The treasure is identical or close to identical to the notable jewelry of a missing noblewoman, believed killed on the King's highway by brigands. Myles Corcoran