G+ Preservation: What's Keeping You from Getting through This Door?


This post documents content from the G+ 1d∞ OSR Obstacles Group. Continued thanks to all the wonderful contributors to this group, and more broadly, to the late, lamented G+ scene. 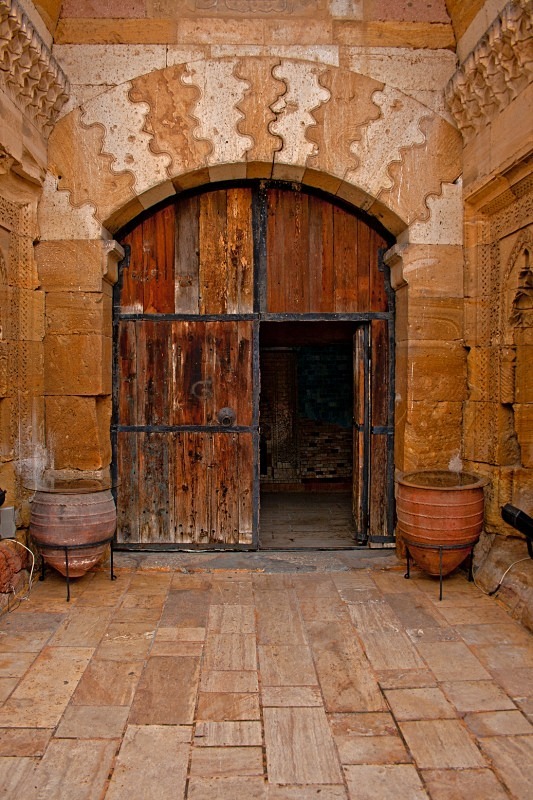 So, why can't you get through this door?
• A burning bush whose fire is not extinguished by water. Kyle Maxwell
• Whoever opens the door to GOAL will have his/her life force bound to that of the guardian of GOAL. Handy Haversack
• The 20-foot moat of lava in front of it. Charlie Vick
• There's a tree, grown through the doorway completely. It's holding this section of the dungeon up. Someone chopped through part of it at some point, but their axe is on the floor next to a busted skeleton with a ceiling-stone atop it. Charlie Vick
• It's a Possession Door. You can walk through it, but good luck with the ghost that'll sneak into your head. There's a bunch of warnings about this in broken common, Dwarfish, Gobbo, etc. Charlie Vick
• The shadows that enshroud it are alive and must be placates by a sacrifice of something valuable before they will allow anyone past. Trey Causey
• Chained across it with unbreakable manacles you find an innocent, perhaps even somebody you know.  They're vague on how they got there, who took them, and why they are chained to the door, and are vague - but not conclusively vague - when questioned about details and facts of their life before the kidnapping. Benjamin Baugh
• When you reach for the door handle, it twists away from your hand like a fearful hound.  If you lunge and grab it, the door bites. Benjamin Baugh
• The door is fungus, that regrows when you cut at it, and releases poison spores if damaged.  The key is a particular mushroom, but it must be alive when slipped into the weird depression where a mundane door would have a keyhole.  Some mushrooms grow in soil, some on wood, others must root in flesh to live. Benjamin Baugh
• It's just big enough to fit your unarmored arm through. Rogue Prismatic Golem
• It is always 1 foot shorter than you, getting smaller as you crouch down. At the same time it shrinks, a hidden door opposite it grows, which you can easily back through. John Stater
• The door looks just like the door of your childhood home. Behind it, you can hear the sounds of the worst thing that ever happened to you as a child. Benjamin Baugh
• The door is covered in decades if not centuries of spiderwebs, shrouded in dust. Here and there, deadly venomous spiders can be spied in the dusty depths. A helpful sign indicates that the room is coated in magnesium dust that will flare instantly if exposed to flames. Myles Corcoran
• The door is locked, but swings open when pushed. Exactly one minute after walking through the book, you are teleported back in front of it. The trick is to run through the next room into the next-next room, grab the key on the skeleton, and use the key to unlock the door. (The lock controls the teleportation on the doorway, not the door itself.) Arnold K.