5e NPC: A Rabblement of Goblins

A rabblement is a collection of bottom-of-the-barrel goblins that have learned to stick together and follow orders. They are enthusiastic, incompetent, and prone to dying in superfluous ways. 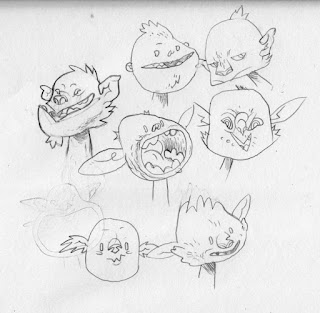 This is for a proposed reverse-dungeon, where the players are monsters who have fled the Caves of Chaos, and taken up residence in an abandoned Quasqueton. I wanted them to have some incompetent underlings running around the place without having to keep track of a bunch of NPCs.

They're not fighters, and altogether are less effective than a single goblin warrior. The rabblement’s main purpose is to act as general factotum to the PCs and provide Help actions. They can only do this when they are all together. If separated from the scrum, the individual goblins become paralyzed with fear and indecision.

Nimble Escape. The rabblement can take the Disengage or Hide action as a bonus action on each of their turns.

Fatal Lack of Common Sense. Whenever the rabblement rolls a 1, they lose 1 hit point. This is true even for skill checks. Even calligraphy.

Occasionally Cooperative. Once per Long Rest, the rabblement can give themselves the benefit of the Help action, gaining Advantage on their next action.

4 tool sets, as determined by their tool proficiencies

Combat
The rabblement is made up of 1-hit point mooks. Every time the rabblement takes a number of hit points in damage, it represents that many goblins slain. The rabblement cannot benefit from mundane or magical healing. Hit points can only be regained by going to a goblin community and recruiting new mooks.

If you attempt to armor the rabblement, they will wear it so incorrectly that they derive no protective benefit and make a god-awful clatter.

If the rabblement engages in combat, their first choice will be to throw whatever is closest to hand—namely, their tools from their tool proficiencies. After any combat in which the rabblement attacked with improvised weapons, there is a 2-in-6 chance that they have destroyed one of their tool sets. If armed with real weapons, they immediately lose 1 hit point/goblin, as they excitedly play with it and fight over who gets to hold it, and lose an additional hit point every time they attempt to use it.

Restoring the rabblement’s hit point requires finding a goblin community and attempting to recruit new goblins. The rabblement are unable to recruit for themselves—mooks don’t respect other mooks.

The recruiting character rolls CHA (Persuasion) or (Intimidation). On a success, the rabblement gains enough new goblin mooks to restore their maximum hit points (or, in the case of very small communities, as many as the referee decrees). On a failure, the goblin community resents your attempt to poach its members and becomes hostile.

The difficulty of recruiting mooks depends on the size and general morale of the goblinoid community. Larger communities are more likely to have dissatisfied peons, and less likely to notice a few missing.

The recruiter’s CHA bonus affects the number of goblins in the rabblement, but the recruiter is not the singular boss of the rabblement. They’ll follow whoever seems like the boss at any given time—usually the last person to succeed on a Persuasion or Intimidation check. 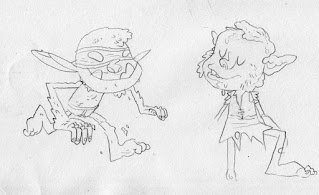 The rabblement may not be much good in combat, but they are not entirely without skills. Roll four times on the table below, re-rolling duplicates, to see what tool proficiencies the rabblement possesses.

Lots of people have come up with the idea of treating groups as single entities, whether it's statting a barroom brawl as a single monster, or allowing players to play small groups, like the Extras. I first saw this idea with John Stater's the Canting Crew, and I think it's brilliant.

The rabblement is very much in the spirit of GoblinQuest, which I recommend highly. Goblin Sketches by Jon Morris, who was born to draw goblins.