July 13, 2018
I've started a D&D campaign for kids and parents. We're running 5e (the kids have the books, and want to use them), but we used tools from Beyond the Wall to generate characters and their home village. 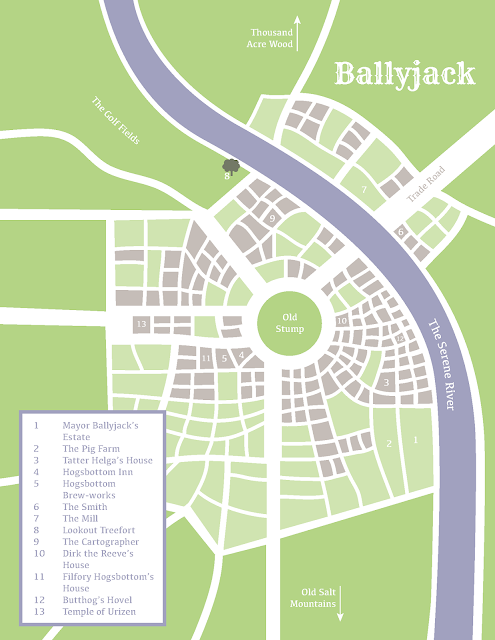 Ballyjack is a village that grew up around the stump of the giant beanstalk that was chopped down centuries ago in a dispute with a local cloud giant. It is now mostly known for pig-farming.

Significant NPCs
Honeywell Ballyjack, Mayor, owner of a large pig farm at the edge of town
Dirk the Reeve, oversees the town for the mayor and enforces the mayor’s decrees
Butthog, Dirk’s lackey, recently kidnapped and beaten by goblins
Filfory Hogsbottom, brewmaster, owner of Hogsbottom Inn and Brew-works
Tatter Helga, a hedge witch who lives in town and makes petty charms and potions
Jerrod the Bard, lives at the Inn, one of the better-traveled and more knowledgeable citizens of the town
Sylvarus Nuthing, a hermit who lives near edge of the Thousand Acre Wood
Timmory Mill, the Miller
Rose Smith, the Blacksmith
Brother Ignatius Salubrious Albion-Jones, the Priest at the Temple of Urizen
Azaela Winton, master cartographer and grandmother of two of the PCs

Collaborative world-building is a good idea with kids in a game, because it gives you a sense of what level they're approaching things from. For instance, it would never have occurred to me to have one character named Hogsbottom and another named Butthog in the same village.

We started playing The Goblin Infestation scenario pack from Beyond the Wall, transitioning it to the goblin caves from Lost Mines of Phandelver, and I expect we're about to take a detour into some homebrew woodlands encounters, or maybe The Witch of Underwillow.