December 29, 2015
I often find rules in D&D that don’t work the way I expect them to, and blame my younger self for having been too lazy to learn the rules correctly back in the day.

This came up recently, when a campaign decided to switch from LL to AD&D, and I was ready to rock this table:

My spell caster was going to get a massive upgrade to his spell book! With INT 18, he was going to go from five spells to at least 18! He had a good chance of making a clean sweep.

Then someone kindly pointed out that the above percentages apply to learning spells that you find lying around amongst owlbear pellets. It takes Gygax about five paragraphs to explain this chart, and... well, let's say that clarity is not among its virtues. 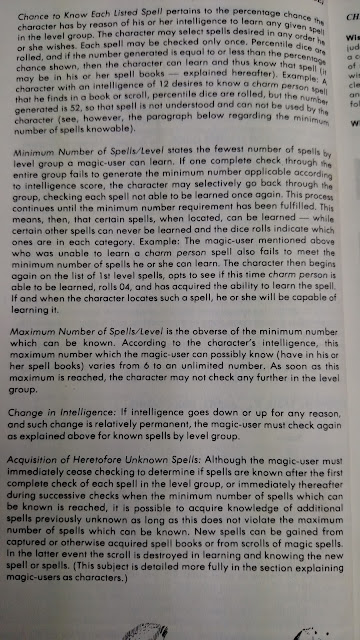 
To summarize the summary: You only have one chance to learn a spell that you find, unless you have a second chance, or if you find a spell.

Here’s the previous iteration of the Spells Known Table from Holmes Basic: 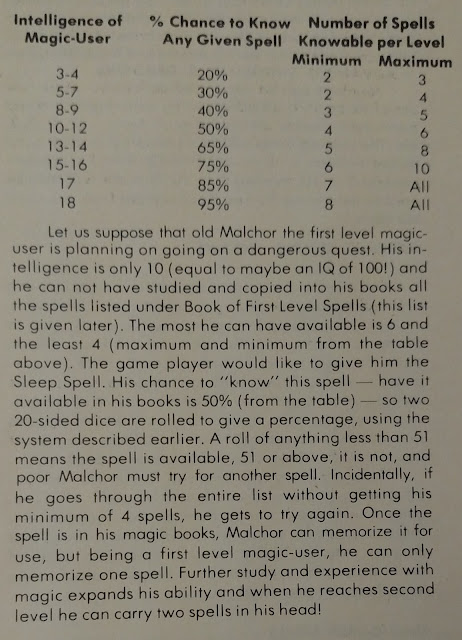 Ah. See, that makes sense. It’s a little chargen mini-game to find out what’s in your spell book.

Of course, Holmesian spell books are massive, immobile tomes that spell casters have to leave at home, and they can only recharge their spells by trekking all the way back. No one-hour study sessions around the campfire for these wizards. Given this lack of portability, it’s nice that they have a bit more selection.

And how adorable is it that you could have a magic user with INT 3?

Moldvay Basic, quite sensibly, doesn’t truck with any of this:

And Cook Expert only adds that a spell-caster has to spend a week with guild masters when leveling up to learn these new spells.