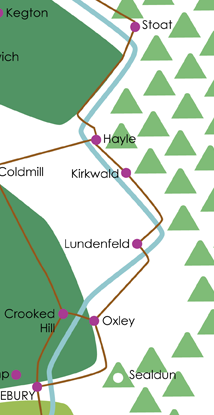 My party is traveling north, from their home village of Herebury to the town of Stoat, to pick up a suit of armor and a few new PCs. I wanted the journey in between to have some color, but didn't want to drag it out with random encounters and side missions.

I assigned each player a village, and asked them to describe it briefly, along with a local NPC. I asked a second player to then elaborate on either the village or the NPC. A third player then rolled a check against Charisma to see how the party faired.

Here are the villages that resulted:

Town: Oxley
Once known as Oxcross, Oxley is known for its livestock who graze the fields east of town. It's proximity to the Thousand Acre Wood makes it home to a good number of hunters and trappers, who protect the town and its herds from wild animals.

Oxley has been grooming their cattle for generations to yield the best tasting beef in the region. They also have a formidable leather working tradition. Most of the local hunters and trappers sports superb leather armor.

Jackar Turnbull is a local hero, well-known and well-loved by the citizenry. He is a forester and hunter with unusual strength, who is said to have stopped a charging bull with his bare hands. Despite persistent claims he has fathered a number of illegitimate children throughout the area, Jackar lives contentedly with Farea, and their son, Ford.

Town: Lundenfeld
Lundenfeld was previously a lumber camp, the town having been built around the camp to make the woodsmen and lumberyards more convenient. Lumber is still the primary export. The people are hardy and rough, but mostly fair, and treat travelers well unless given reason not to.

Lundenfeld shares a mostly-friendly rivalry with the Herebury’s lumber camp. Irregular festivals of games are held between the lumberjacks from the two towns. Since both lumber camps are primarily occupied by bachelors, the games tend to be rough, crude, and raucous—not a family affair. There are awards for wood chopping, pig-catching, axe throwing, timber climbing, drinking, wrestling, pissing (both distance and quantity), and pie-eating.

Jerram Korlet has been in charge of the lumberyard since his father passed 12 years ago, he is a fair man that gives fair wages but has a tendency to play favorites and can have a mean temper with those he does not know.

Town: Kirkwald
One of the oldest towns in the Olfdene, Kirkwald dabbles in everything—lumber, mining, fishing, and agriculture. It is the financial capitol of Olfdene. If you want a loan bigger than the local lord can provide, this is where you’ll go.

Jack-in-Hassock. This highway man has accrued a romantic legend and reputation as a hero to the working poor. Most stories declare that he is a rebellious son of whichever of Kirkwald’s banking families is most on people’s minds that season. No one has actually seen a cent of this thief’s purported charity to the local poor, but his legend persists.

A common version of the story names the bandit as Jack Stampf, the last of many sons of a faded branch of the Stampf family tree, driven into the wilds and a life of crime by the loss of his love, Melynde Porter.

The beautiful daughter of a burly porter in the Stampf Goodsyard, Melynde was the a rare casualty of a raid by the Hayle Hayles. When Melynde's father took his anger and grief out on Yoland Stampf, he was in turn beaten and crippled. Seeing the injustice of the Stampf's rule of Kirkwald, Jack turned against his family, killed Yoland in his sleep, gave some small portion of his wealth to the broken porter, and fled into the forest never to be seen in Kirkwald again.

These events, if they took place at all, occurred several generations ago. Variations of the story claim that Jack-in-Hassock is kept alive by a charm or a curse, that he is a ghost who haunts the roads, or that he founded a dynasty of brigands—passing down the name of Kirkwald's most notorious son each generation.

Town: Hayle
A crossroads town, imaginatively named after the founding family, Hayle exists primarily due to a feud between the Hayles and the Stampfs, Kirkwald’s most prominent family, that drove the Hayles north, though not very far. Hayle still exists due to the quality of the river boats they build, and their bustling monthly market mixing small-time mining materials from the east and products from the forest and river to the west.

Almost everyone in Hayle is a Hayle, and they maintain their hatred of the Stampfs out of tradition, even though the feud has cooled off greatly since Hayle-town was founded in the teenage years of Jebben Hayle. At eighty odd years, Jebben is the oldest Hayle in Hayle, and the town’s figurehead leader, though his grandson Pilk competently handles most practical matters for the town. Jebben mostly spends his time sitting by the well in the middle of town, smoking his long pipe and grousing about the Stapmfs to anyone who’ll listen.

Because the town is mostly made up of members of the Hayle family, there is a shortage of eligible bachelors and bachelorettes (although some do regularly wed second and third cousins). For this reason the single men and women of the town are extremely welcoming to non-Stampf visitors. The town's monthly markets promise to bring in outsiders, and it is treated like a festival. Out of habit almost everyone dresses their best and many will even bathe beforehand.

The shortage of fresh blood has also led to Hayle's latest scandal: those in the know say that Delf Hayle recently got Selma Stampf in a family way. Pilk's been busy trying to keep the all-but-dormant feud from heating up again, and it's almost impossible to get Jebben to speak about anything else.

I'm pretty pleased with the results. Plenty of local color, even some soap opera intrigue. And it's nice that the players have some authority on what's in their own backyard.

Villages reproduced here with permission of the players.